Put aside the electronics – it’s time for a family game night! Nowadays, it seems like iPod’s and iPhones have taken over our everyday lives. But there is a time and place for that, and there are definitely limits. With this being said, using electronics and technology should not be a way to spend times with your family. It’s time to ditch cyberspace and bond the good old-fashioned way, and hosting a game night is a perfect way to spend some time with your loved ones, learn new skills, engage in challenges, and have fun! 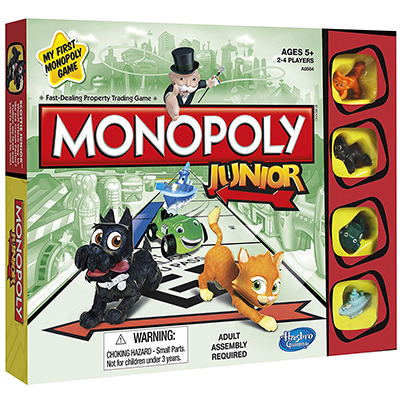 For the young and the young at heart! This is a classic board game that’s loved among many. Monopoly Jr. is just as fun as the standard version, but it is intended for younger kids. It’s more simplified with instructions that are easy to follow, and it doesn’t last as long as the other Monopoly games. Like the original, it includes 4 junior tokens, and throughout the game they will be managing their own money, buying property and collecting rent on the property that they own. Which kid wouldn’t want to buy a pizza shop or an ice cream parlour? They also use dollar bills, which make it easier for kids to count and keep track of their money (so they’re secretly learning math skills without even knowing it!) It’s easy enough for them to play, but also fun enough for adults to play too! The game ends whenever someone runs out of money, and the player with the most money wins. 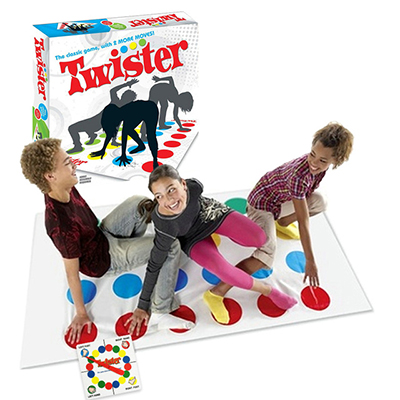 Twister has been around since the 1960s and there is nothing quite like it! It’s a hilarious and challenging game that is perfect for the whole family to enjoy. This classic game is just like the original, but it introduces 2 new moves. The point of the game is to put your hands and feet at different coloured spots on the mat without falling over, and the last player standing wins! Keep in mind though; no two people can have a hand and foot on the same circle. Sounds easy enough, but when you’re trying to put your left foot on yellow just like everyone else, you’ll find yourself wrapped up in a human tangle! If a person falls or their elbow or knee touches the mat, they’re out. This version also features Spinner’s Choice, where the person who spins chooses the next move. It’s a great test of balance and flexibility and a night full of laughter!

Fun Fact: Twister was the first game invented that required people to use their bodies as playing pieces! 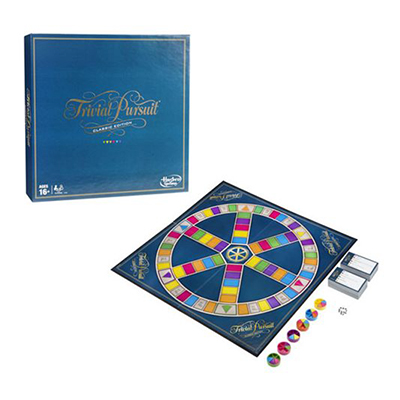 Test your knowledge with this family-friendly version of Trivial Pursuit! This edition has questions for kids and adults, and it also goes at a quicker pace to keep the kids engaged. With this game, there are 1200 questions (600 for kids and 600 for adults) and 6 different categories so your knowledge will be put to the test. It’s the same idea as the classic Trivial Pursuit, but for this version, the questions have been updated to include recent current events and world records. It’s a good mix of questions that range from fairly easy to fairly hard. Whether you play individually or in pairs, you will be learning and laughing along the way! 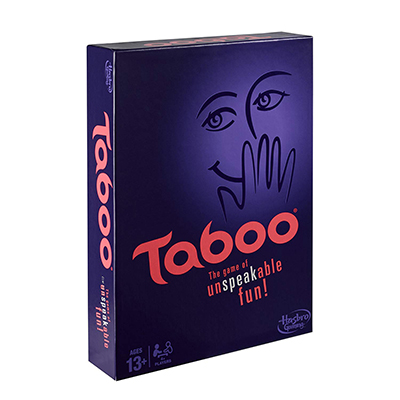 This is a game of forbidden words and quick thinking! The point of this game is to guess a word, but the obvious clues are strictly prohibited. For example, if the word is coffee, you can’t say brown, hot, flavoured, iced, or brewed. Not only are you forbidden from using certain words, but you also have a time limit! If you mention a word you aren’t supposed to, you lose a point. It’s up to you and your partner to think of creative words and clues in order to guess the word fast before the timer ends. In the newer version, the words have been updated so it may be easier for the younger kids to give clues and guess the answer correctly. In addition, this version features a die in order to spice up the game. For example, if it lands on One Guesser, only one teammate can guess on their turn, or All Play, where everyone guesses on that round. It a great family game and can get hilarious as you watch how everyone reacts under pressure! 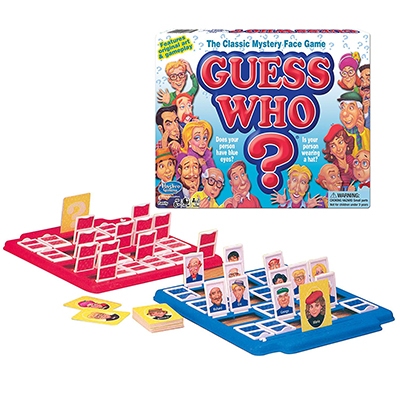 The original guessing game! This game features a tabletop style board with a bunch of different characters. Each player chooses a mystery character from a deck of cards and then uses yes or no questions to try and figure out the other player’s character. For example, if you ask, “Does your character have blonde hair?” and your opponent says no, then you must tap down all the players with blonde hair. When you think you know who your opponent’s character is, you can take a guess. If you get it wrong, you lose the game! Since it is a game for two players, it’s great a great game for your kids, or for parents/single parents who just have one child and wish to play with them.

This game is pretty straightforward and seems fairly easy. You pick a card, read the topic, and then name 3 things that fit that topic. But there’s a twist – You only have 5 seconds to do this. The timer consists of three small marbles that run down a spiral ramp, so you must answer the question before it reaches to the bottom. Pretty soon you’ll be getting tongue tied and screaming out the wackiest answers in this fast-paced, hilarious game! What’s great is that it is adaptable to any age group so anyone from younger kids to older adults can enjoy this game. It’s a guaranteed night full of laughers!

Fun Fact: Ellen Degeneres plays this game on her show! 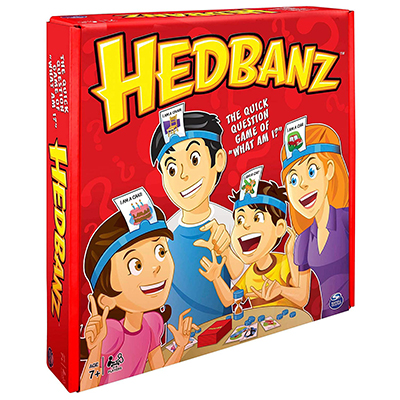 This is a great game that allows kids to use their deductive reasoning and creative thinking skills by using descriptive words, making connections, and asking questions. It’s a fast-paced, family-fun guessing game of “What Am I,” that requires you to figure out if the cartoon strapped above your head is an animal, food, or man-made object. You must ask yes or no questions, and the sand-clock timer only gives you one minute to figure out the answer. The categories are simple enough to allow both kid and adults to join in on the fun. Funny questions and wild answers make this challenging game a great choice for family game night! 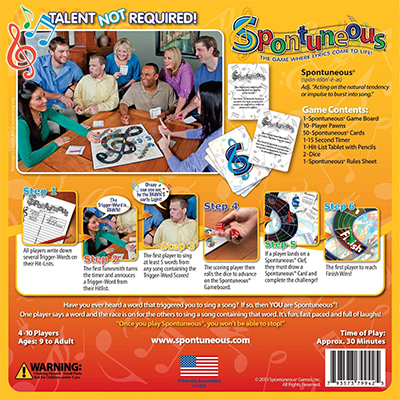 This is a song game that doesn’t require you to have any talent! Tears will be rolling down your cheeks because of how funny this game gets while you play. The game goes as follows: You write down a list of trigger words, and when it’s your turn you say one of them. The other players compete to sing a song containing that word, and they must sing a minimum if five words containing the trigger word. The first player who sings five words first scores a point. For example, if the trigger word is “love,” a player must sing, “Stop, in the name of love.” The goal is to stump to players from singing a song from your list. There are also Spontuneous Clef cards, and you have to do whatever it says. For example, you must sing an entire jingle in 15 seconds. This hilarious game will keep you and your family entertained for hours! 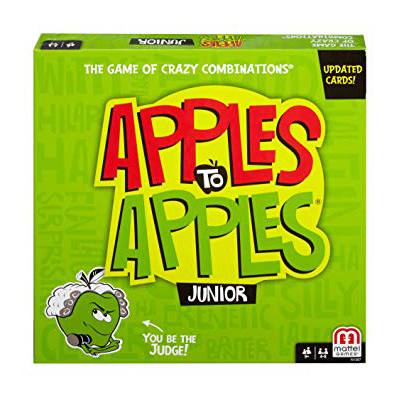 A great way for kids to expand their vocabulary and thinking skills! This is a game of comparison based on the popular card game in a junior edition. The game is simple – there is a deck of green cards, which is used by the judge, and red cards, which is distributed to the players. Each player takes turns being the judge, and the judge begins each round by choosing a green card that features a one-word characteristic. The players must then choose which word best describes the word on the green card from their stack of red cards. For example, if the green card says “expensive,” you must choose a word from your red cards that best describes that word. You must then try to convince the judge why your word best matches the word on the green card. If the judge chooses your card, you win that round. The first player to win 4 rounds wins the game! 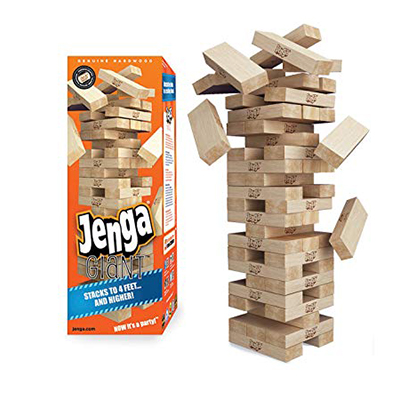 You take a block from the bottom and you put it on top, you take a block from the middle and you put it on top… Anyone remember this jingle from Jenga? If you do, then you know it’s a classic game of suspense, skill, strategy, and luck! It’s simple – you must build a tower with a collection of wooden blocks, then each player must take a block out and stack it back on top without crashing the tower. If you are the last player to remove a block without causing the stack to crash, you win! It’s pretty straightforward, but you can make your own rules that each player must follow to spice up the game. For example, you must only use your non-dominant hand to remove a block. It’s a timeless game made fun for the whole gang!

Entertainment and Media Family and Community 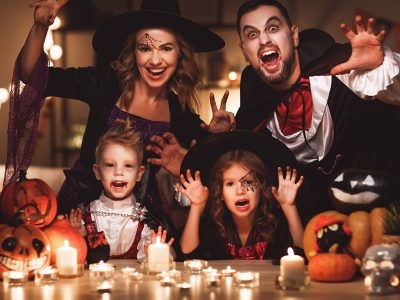 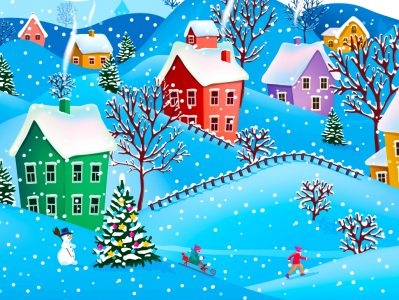 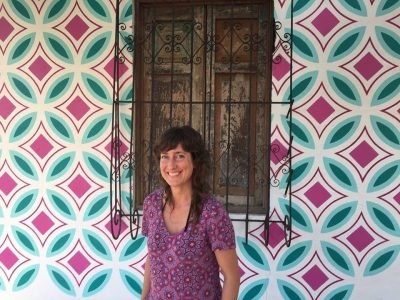